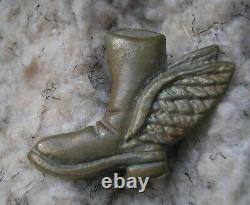 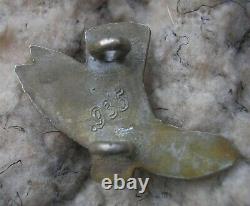 Overall in'Very Good Condition' 30x20mm markings # 935. The Late Arrivals Club was an informal Association which began amongst British servicemen in the Western Desert during the Second World War.

Membership was awarded to military personnel serving under British and Commonwealth Services, who had walked back to their own side from behind enemy lines. The item "Ww2 RAFLate Arrivals Club Winged Boot Badge Its Never Too Late-Rare Original" is in sale since Tuesday, November 3, 2020. This item is in the category "Collectables\Militaria\World War II (1939-1945)\RAF".

The seller is "militarystrike123" and is located in Walton-on-Thames. This item can be shipped worldwide.