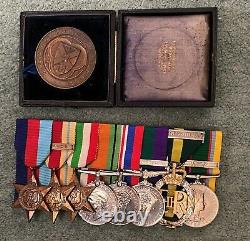 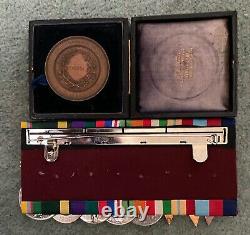 With second award bar and a. This is a rare group featuring Triple Long Service awards. Full details of the Regimental Diary are in the book The Royal Berkshire Regiment 10th Battalion in the Second World War produced by the The Rifles (Berkshire and Wiltshire) Museum which is also included in this sale. Stuart was born on the 13th September 1913 and educated at Edinburgh University, where he gained a degree in French. On the 5th April 1941, Stuart was commissioned from the Officer Cadet Training Unit as a 2nd Lieutenant in the 10th Battalion, Royal Berkshire Regiment (full details of the regiment during the war are contained on the). The following is a summary of the Battalions War Diary, interspersed with relevant facts regarding Stuart. January 1942:still in Suffolk commenced intensive training. 28 August 1942: Set sail from Liverpool. 1st October 1942: Stuart promoted to Lieutenant. 05 November 1942: Landed at Basra, Iraq. They then moved on to Kirkuk for further training. March 1943: Left for Egypt where they continued their training.

June 1943: Went to Gaza where they were ordered to waterproof all their vehicles. July 1943: Set sail for invasion of Sicily - codenamed Operation Husky. Their first aation was at Fossa Bottaceto and they suffered heavy casualties. Remained for a further five days under fire at a place they named "Berkshire Farm" before being withdrawn into reserve. They were then involved in operations around Primasole.

05 August 1943: They took part in the General Advance after the German defences were breached at Etna. 10 October 1943: Moved to Italy and in the same month went on to a position at Pignataro then after took part in the attack on the ridge at Calvi Risorta followed by further actions at Teano, Gloriana and Roccamonfina. Winter of 1943: In action at the River Garigliano and Monte Camino. Early December 1943: Battalion was relieved and moved to Casanova. 20 January 1944: The Battalion themselves crossed the river.

21 January 1944: The Battalion arrived and occupied Mount Damiano. They were instantly attacked repeatedly by the Germans from dawn onwards. 22 January 1944: That afternoon the Battalion had experienced the heaviest shelling ever. They still managed to hold the hill. Fighting continued for a few more days. 25 January 1944: Were relieved and was able to have a short rest. They became part of an independent brigade group. 02 February 1944: Landed in Anzio, Italy and took up position north of the town. 05 February 1944: Took over part of the line near Carroceto from the divisional reconnaissance regiment.

25th February 1944: Stuart was Severely wounded in action. 04 March 1944: The Battalion a long with the Division were sent back to Egypt to re fit.

April 1944: the Battalion disbanded due to the lack of manpower. Most of the men remaining transferred to other units within the 56th (London) division known as the Black cats (Divisional sign). Further details of Stuarts service during the war would be worthy of research as he also saw service with the 2nd Battalion, Sherwood Foresters in Palestine during the Jewish Revolt. He then relinquished his commission on appointment to The Territorial Army on the 31st July 1946 and joined the Junior Training Corps, Abingdon School ContIngent as a 2nd Lieutenant on the same day. On the 1st April 1950 Stuart, sIll serving with the Abingdon School ConIngent (now part of the Combined Cadet Force) was promoted to Lieutenant and on the 11th April 1951 he was made ActIng Major.

On the 17th March 1959, Stuart was awarded the Territorial Efficiency DecoraIon and on the 1st July 1960, he relinquished his Commission in the Regular Reserve of Officers with the rank of Lieutenant (sIll remaining in service with the Combined Cadet Force - Abingdon School ConIngent). On the 1st April 1961 Stuart was promoted to Lieutenant-Colonel and on the 30th January 1973 he was awarded the Cadet Forces Medal. In September 1973 Stuart is reported in the Abingdonian Magazine to have relinquished command of the Abingdon School ConIngent, Combined Cadet Force. At the end of the term Colonel Parker relinquished the command of the CCF, which he had held for some seventeen years. In that time the size of the Corps has more than doubled and advanced naval and air sections have been added to its establishment.

Successive Inspecting Officers have paid high tribute to the efficiency of the Corps under Colonel Parkers command and new would thank him on behalf of the school for all that the has done. Despite the above, The London Gazette records that he resigned his Commission in the Abingdon School ConIngent, Combined Cadet Force on the 13th September 1978 with the rank of Lieutenant- Colonel. Sadly on the 28th June 1981, Stuart passed away.