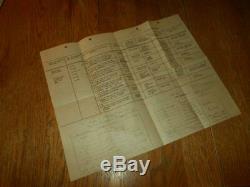 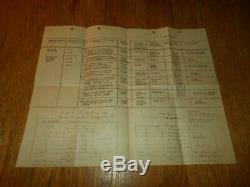 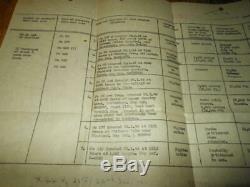 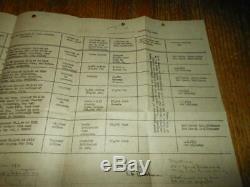 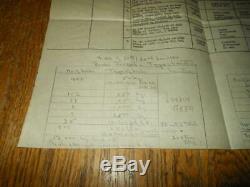 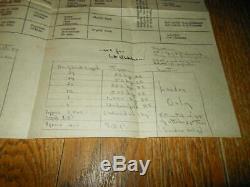 This specifically outlines a loss of a various German aircraft over London, on the night of January 21-22, 1944, as well as the amount of bombs dropped. Rare, large, partially typed document, 1p.

21, 1945 on the effects of German bombing attacks on London and British counter-measures. The report indicates that 98 German aircraft attacked, with 13 destroyed, seven over land. Seven of the downed planes are identified as to their crash sites, cause of crash (AA or fighter action), altitude at which bombing was to take place, and intelligence officers so attached. Beneath appears a handwritten analysis of bombing attacks on London for the night of Jan. 21-22 indicating the numbers of bombs of various weights dropped on the city, the types, and total tonnage.

The report, stamped "SECRET", is annotated: Save for Lt. Made of lightweight paper, this British Combat & Bombing Report is in EXCELLENT used condition! Some marks, wear, and fold, but nothing that detracts. Dated Jan 21, 1944, it discusses the effect of German bombing attacks on London, as well as British counter-measures. It indicates a total of 98 German aircraft attacked London Ju88, Ju188, He177, Fw190. Do217, and Me410, with 13 destroyed (7 over land).

The 7 planes are identified, along with the crash locations. At the bottom, it totals the numbers and types of bombs dropped over London, as well as the total tonnage. A SUPERB piece of history, it would make an EXCELLENT addition to any collection or display!

Most of my items are vintage, and as such are AS-IS, so you must therefore expect a degree of wear due to age and/or usage. Although my passion is the Me109, I do offer many other German Aircraft Fw190, Me262, etc. , as well as USAF and Japanese items. Occasionally I do offer many non-vintage items such as prints and art relating to the time period.

Use is solely based on my authorization only. The item "WW2 British RAF Combat Report BOMBING REPORT OVER LONDON 1944 VERY RARE" is in sale since Sunday, June 2, 2019. This item is in the category "Collectibles\Militaria\WW II (1939-45)\Original Period Items\Great Britain\Paper Items, Newspapers". The seller is "messerschmitt*109" and is located in Agoura Hills, California. This item can be shipped worldwide.