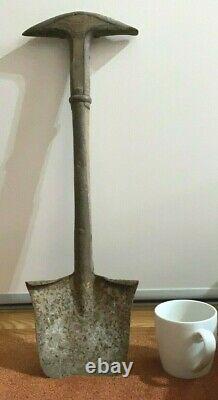 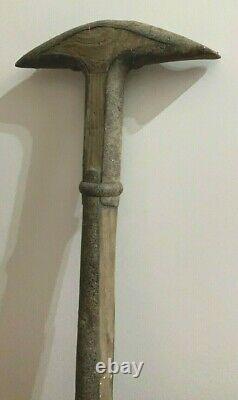 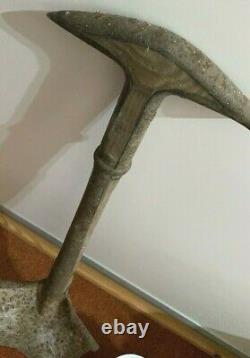 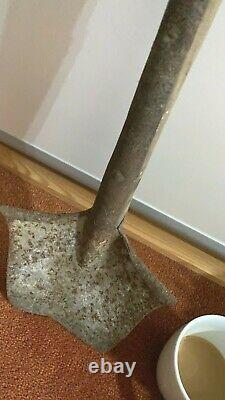 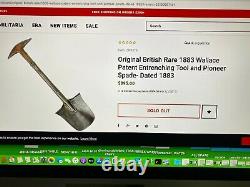 Original Item: Few people get excited about military entrenching tools BUT this is the Holy Grail! Entrenching Tools became essential in WWI and then again in WWII however they were first officially introduced during the Victorian era as "essential equipment". The rarest of them all is the scarce Wallace Patent entrenching tool patented in 1883 by Nesbit Willoughby Wallace, which was a design of sheer genius.

This not only has a well designed very rounded curved blade [tip worn]with long support spines up the handle shaft but the "crossbar" at the hilt is cleverly steel wrapped and doubles as a "pick and bladed hammer". This had to be a nightmare and costly to make and one can. Understand why these are so very hard to come by as many probably taken home to the garden shed! Offered in untouched condition and only example I seen save for one. My example is offered in as seen used condition.

An excerpt from the book The battle of Tofrek By William Galloway. THE "WALLACE" ENTRENCHING TOOL AND PIONEER SPADE.

The following description of the. Entrenching tools, used extensively on the 22nd of March in constructing the defences, may be of interest.

This tool, which weighs about 2 lbs. And is 23 inches long, is patented in England and America and on the Continent, and has been adopted by the English and South Australian Governments. It is a small spade with a broad blade, and a crosspick for the handle.

The pick consists of an armoured wooden crutch, the wood of which forms a strong backing to the steel point, and acts as a buffer against the jar caused by repeated blows. It is covered with steel sheathing, which is in two parts, fits closely to the wooden head, and is fastened on by rivets to the crutch, and by rivets and a band to the handle. Each point is composed of one-inch of solid steel, which, when blunted by use, can be sharpened. One end is a pick, the other a grubber. The metal used is very hard and well-tempered, while the tool is made so as to be easily repaired if damaged.

To put it briefly, the chief virtues of the entrenching tool are the simple combination of pick and spade, which is obtained without any complicated arrangement; the shape of the blade; and the projection at the back, which guards the knuckles when digging, and also'cants' the blade to clear the wrist when the pick is used. The British Government has just ordered 20,000 of these entrenching tools, having been previously supplied with 30,000. Foreign countries have ordered a supply for an exhaustive trial of their peculiar merits.

The' Pioneer' spade, is intended for clearing ground and for bushwork, where the combination of a serviceable billhook with a small pick and spade must often be very convenient. Major Wallace's tools are not intended to take the place of the full-sized'Pioneer' picks and shovels, which will still be necessary for all heavy digging and for rocky ground, though, on an emergency, the'Wallace' spade may be found a fair substitute. It is claimed for these tools that they are of extraordinary strength for their size and weight, and that they may be relied on to stand very severe wear and tear, if fairly used, and even to do work of which, at first sight, they would hardly be thought capable.

For instance, they will break down or loophole an ordinary stone or brick wall though, perhaps, at the cost of some of the spades. Loopholing was successfully carried out with them in the first Egyptian campaign, when they were also found to be useful and efficient substitutes for small axes in cutting firewood, and invaluable in camp life.

Numerous testimonials, from general and other officers, and also from civil engineers, are before the writer, in proof of the above. The spades are not offered as cheap tools. They are made of the very best materials picked ashen shafts and steel of the first quality; and they have to be put together with great care. So long as this is the case the spades can never be cheaply turned out though a large order can be executed at a considerable reduction in price. Lucas and Son, of Dronfield, are the manufacturers. The Illustrated Naval and Military Magazine, July 1885. The item "WW1, WW2, British Rare 1883 Wallace Patent Entrenching Tool and Pioneer Spade" is in sale since Friday, March 5, 2021. This item is in the category "Collectables\Militaria\Surplus/ Equipment\Field Gear". The seller is "scooter17-1" and is located in Hornchurch.