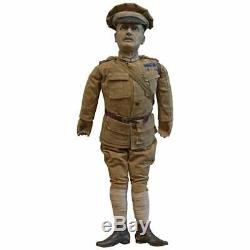 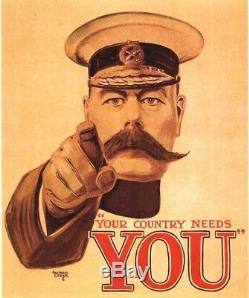 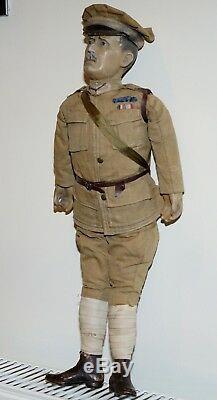 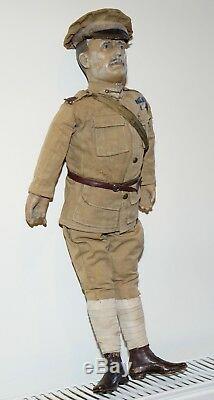 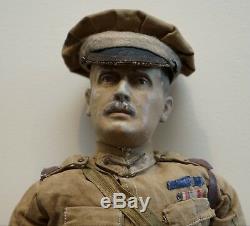 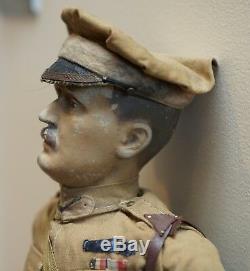 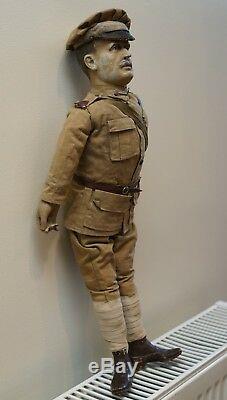 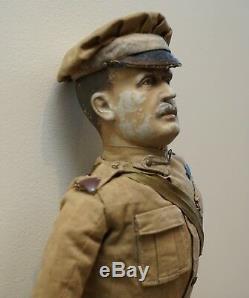 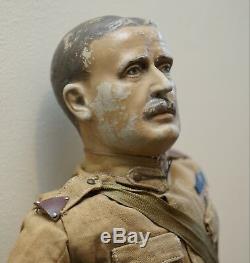 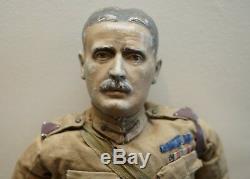 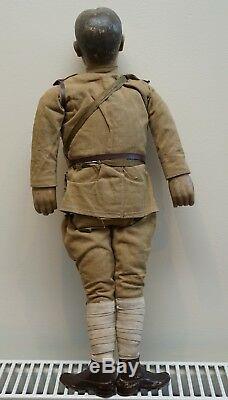 There are multiple high definition super-sized pictures at the bottom of this page. If the face looks familiar he was the chap on the Your Country Needs YOU posters as pictured, these dolls are exceptionally collectable, they never come up for sale, you can see one example in the Imperial War Museum London. Description Large scale doll featuring bisque head, hands and feet; with a painted character head in the likeness of Lord Kitchener. Doll is supplied with an officer's cap made from khaki cotton drill, leather, gold braid and red felt on a thick card base.

The tunic and knee-length breeches are also made from cotton drill and feature four patch pockets, with nickel-plated paper fasteners for buttons, real leather Sam Browne belt and holster, red felt collar tabs and a length of scrap medal ribbon under a blue band sewn to the left breast to represent Kitchener's medals. A length of 13 mm wide cotton tape is wrapped round each leg to represent puttees. The bisque boots are painted dark brown. The doll's body is cloth with a wadding fill, to which the bisque hands, feet and head have been sewn. History / Summary A product of the Lord Roberts Workshops in England, which were set up during the First World War to provide employment to disabled soldiers and sailors, this doll was a popular feature of their "Patriotic" series.

Kitchener initially rose to prominence upon becoming Commander-in-Chief of the Egyptian army and taking the city of Khartoum in 1898 after a two year battle which earned him the nickname of "Kitchener of Khartoum". He cemented his reputation towards the end of the Boer War, during which time Australian troops came into contact with him.

From 1902 -1909, Field Marshall Viscount Kitchener commanded Britain's Indian forces. In 1909/10 he visited Australia at the invitation of Prime Minister Alfred Deakin to inspect and advise on the country's defence preparedness. Kitchener's report, submitted in February 1910, recommended the introduction of compulsory military training which was immediately adopted, as was the establishment of the Military College, Duntroon. His visit was accompanied by popular outpourings of sentiment and the production of countless souvenirs.

The British government had no hesitation in appointing Kitchener the Secretary of State for War in 1914, employing his face on the now famous "I Want You" recruiting posters and handing him the administration of all British Forces. Against his better judgement, and under considerable pressure from Winston Churchill, Kitchener agreed to support the Gallipoli campaign in February 1915, but its disastrous outcome damaged his military reputation.

His tour of Gallipoli on 13 November 1915 included meeting Australian troops and their commanders. Kitchener died on 5 June 1916, when the cruiser he was sailing on was sunk by a German mine off Scapa Flow.

Dimensions & weight to follow. Wimbledon-Furniture is a privately owned family ran business out of Wimbledon SW19, we have four large storage warehouses, if you have any questions my number is under the business sellers information, please feel free to call or text. Please view the very detailed pictures as they form part of the description around condition. Please note vintage period and original items such as leather seating will always have natural patina in the form of cracking creasing and wear, we recommend regular waxing to ensure no moisture is lost, also hand dyed leather is not recommended to sit in direct sunlight for prolonged periods of time as it will dry out and fade. The item "VERY RARE 1898-1914 BRITISH PATRIOTIC PROPAGANDA DOLL OF LORD HORATIO KITCHENER" is in sale since Monday, August 5, 2019. This item is in the category "Collectables\Militaria\World War I (1914-1918)\Other World War I Militaria". The seller is "wimbledon-furniture-01" and is located in London Wimbledon. This item can be shipped worldwide.