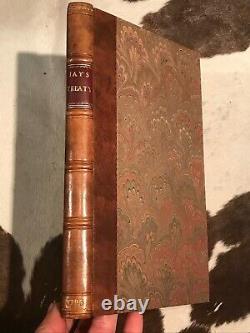 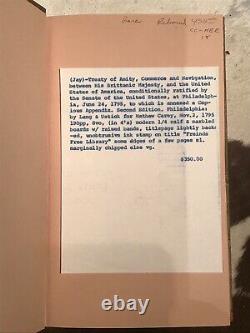 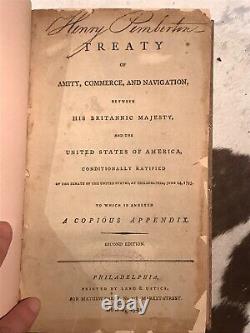 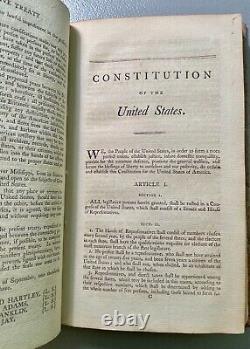 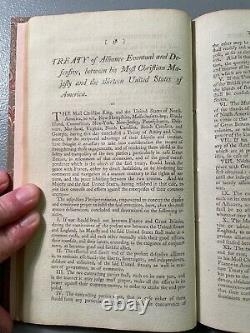 Treaty of Amity, Commerce, and Navigation, between his Britannic Majesty, and the United States of America, Conditionally Ratified by the Senate of the United States, at Philadelphia, June 24, 1795 to Which is Annexed a Copious Appendix, by John Jay. Printed by Lang and Ustick. Published by Mathew Carey, Philadelphia. 190 pages with 2 pages of adverts for Carey at end. 5 1/8" by 8 1/2" inches. Contemporary 1/4 calf leather fine binding with 5 raised bands and contemporary marbled boards. Unobtrusive ink stamp "Friends Free Library" on title page. Some page edges marginally tattered.

Else a beautifully well preserved copy. Contents include: Jay's Treaty which sought to resolve problems with the 1783 Treaty, which ended the American Revolution: The Text of the United States Constitution: and the texts of two 1778 treaties with France: As well as speeches and reports of various members of Congress of ongoing commercial problems with Great Britain and the withdrawal of British troops from the frontier posts in Ohio Country. The item "Treaty Between Great Britain United States John Jay 1795 Rare Fine Binding VG" is in sale since Monday, February 22, 2021.

This item is in the category "Collectibles\Militaria\Revolutionary War (1775-83)\Original Period Items". The seller is "beija-flor-books" and is located in Athens, Georgia. This item can be shipped worldwide.