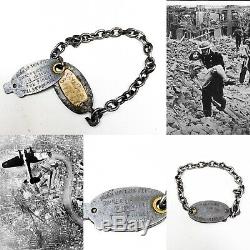 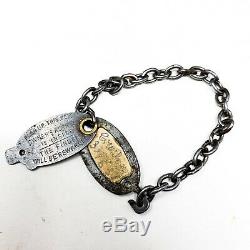 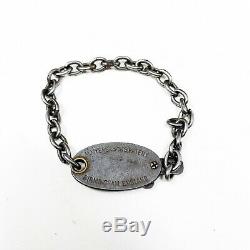 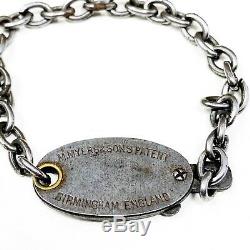 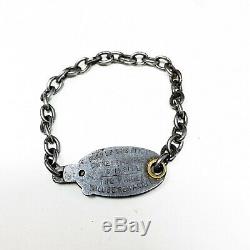 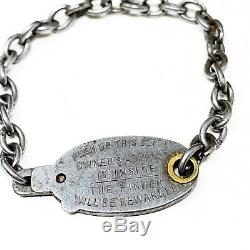 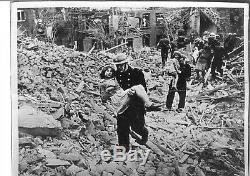 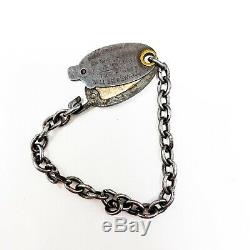 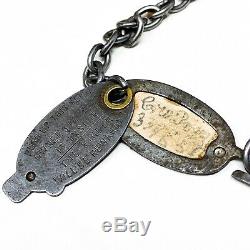 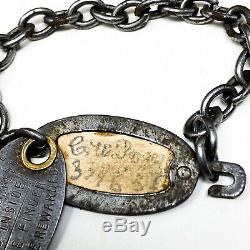 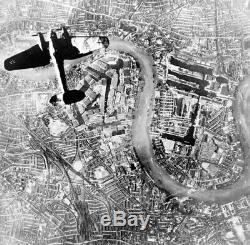 Please note the rarity of these Blitz bracelets and the super personal nature of this artifact. This original WWII era Birmingham Blitz ID bracelet was made and constructed by the M. Myers & Sons company located in Birmingham, England.

The backside of the bracelet reads Push up this sliol. The finer will be rewarded. The locking and clasp mechanism of the bracelet are in working order and has the original paper with the information of the child who wore it still preserved inside. During World War II , not everyone could bear to let their children go on the evacuation. The British government instructed citizens that if children were not evacuated they had to wear an identity bracelet.

Jean Bullows, a surviing child of the Birmingham Blitz raids is quoted as saying, So if your mum, dad or you got killed or injured in the bombing, then somebody would read your bracelet. Also if you were little and got separated from your family in an air raid, you might not know your address. During World War II, 100,000 London homes were destroyed and over one million houses suffered damage. Over 80,000 Londoners were killed or seriously injured. One in ten of all deaths that occurred during the war were children. Bomb injuries suffered by Londoners often made identifying wounded people difficult. The authorities encouraged civilians to wear identity tags to speed up the process. Many Londoners wore metal bracelets like this one engraved with their personal details, to help with identification. The Birmingham Blitz was the heavy bombing by the Nazi German Luftwaffe of the city of Birmingham and surrounding towns in central England, beginning on 9 August 1940 and ending on 23 April 1943.

It is considered a fraction of the greater Blitz, which was part of the Battle of Britain. Situated in the Midlands, Birmingham, England's most populous British city outside London, is an important industrial and manufacturing location. Around 1,852 tons of bombs were dropped on Birmingham, making it the third most heavily bombed city in the United Kingdom in the Second World War, behind only London and Liverpool. Overall, there were 365 air raid alerts, and 77 actual air raids on Birmingham, eight of which were classified as major (in which at least 100 tons of bombs were dropped).

[1][3] Official figures state that 5,129 high explosive bombs and 48 parachute mines landed on the city, along with many thousands of incendiary bombs. Of the high explosive bombs, around one fifth failed to detonate and one third of the parachute mines were left suspended after the parachute cords became caught in various obstacles such as trees. In total, 2,241 people were killed, and 3,010 seriously injured.

A further 3,682 sustained lesser injuries. 12,391 houses, 302 factories and 239 other buildings were destroyed, with many more damaged.

The item "Rare WWII Birmingham Blitz Child ID Identification Bracelet Luftwaffe Relic" is in sale since Sunday, May 10, 2020. This item is in the category "Collectibles\Militaria\WW II (1939-45)\Original Period Items\Great Britain\Personal, Field Gear". The seller is "worldwarartifactsandrelics" and is located in Algonquin, Illinois.