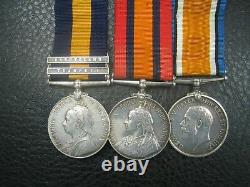 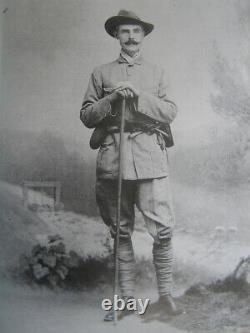 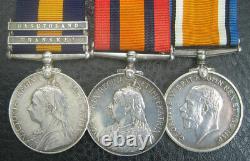 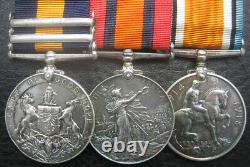 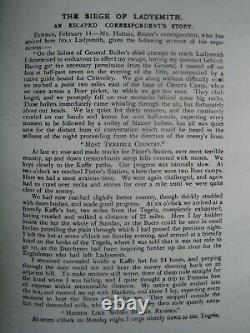 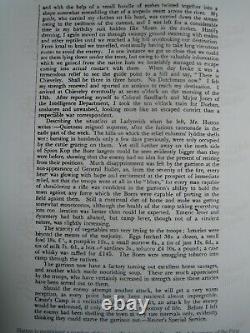 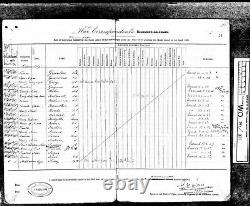 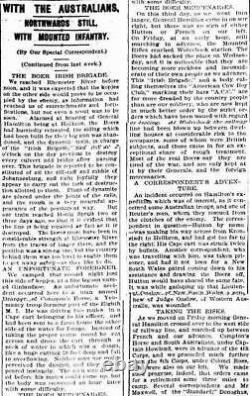 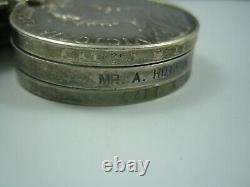 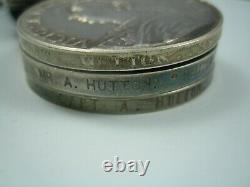 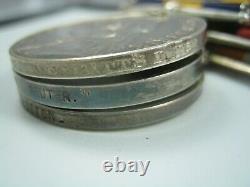 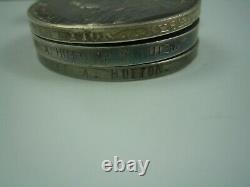 AN OUTSTANDING OFFICERS CAPE OF GOOD HOPE AND SOUTH AFRICA 1899 GROUP TO A WAR CORRESPONDENT WHOS DARING ESCAPE FROM THE BESIEGED TOWN OF LADYSMITH WAS WIDELY COVERED IN THE PRESS OF THE DAY AND WHO LATER UNDER FIRE IN AUGUST 1900 WAS SAVED FROM CAPTURE BY AUSTRALIAN TROOPS. CAPE OF GOOD HOPE GENERAL SERVICE 1880-97, 2 CLASPS. BRITISH WAR MEDAL 1914-20 CAPT.

Arthur Hutton was born in Liverpool in 1857 and served as a Captain of Nesbitts Light Horse during the campaigns in the. 1880-81 and at the outbreak of the Boer War, served as a Special Correspondent for Reuters New Agency. Like a number of other Specials, Huttons prior military experience no doubt served him well as he would have been familiar with military tactics and terminology. Hutton, was with Lieutenant General Sir George Whites forces that were besieged in Ladysmith from 2 November 1899. Initially it seems Hutton was able to get dispatches out of the town which were then published, one of which dated 15 November 1899 stated that. Our field guns now opened fire with shrapnel, but for sometime the shells burst very short, the range, apparently, being too great for our smaller guns. In the meantime a war balloon had ascended, being attached to an armoured train, and seeing our fire was all short, sent down a message to that effect, which was at once transmitted to the general by a field telephone. The effect was soon evident, for our shells now burst beautifully over the heads of the enemy.

He had probably been taken prisoner and. Hutton, of Reuter's, and I asked leave to go out to the Boer camp to inquire after him. But the General was wroth, and would not listen to the proposal.

From studying newspaper reports over the next few months, more dispatches could probably be found, though as the siege went on and the Boer grip tightened, almost no information was coming into or out of the town bar what was heliographed between the relieving force and General White. What is known is that Hutton had written. A long cable message and entrusted it, with his last and best horse, to a Kaffir, whom he sent out into the night to find a way through the Boer lines to the British camp and the telegraph-office beyond. After his escape he learned that the Kaffir had never reached his destination. His fate whether he was killed or captured was unknown.

Hutton supposed the Kaffir was safe, but was not inclined to be reconciled to the loss of the horse, which, as he said, as a valuable animal, brought out from. By chance, later in the war, an American special by the name of Unger, had met a German Special, who had been fighting with the Boer Forces at Ladysmith and had mentioned shooting and killing a mounted native who had been tying to cross the Boer lines.

The German had taken the horse for his own and kept a satchel full of papers, these containing Huttons missing telegrams! Both the above come from With "Bobs" and Krüger by F W Unger, an American War Correspondent (copy included on CD with research). Hutton is mentioned a large number of times as Unger talks of them travelling together following the army, shortly after Huttons escape from Ladysmith. He also notes meeting Hutton in. Back at Ladysmith and probably more to do with getting a scoop than anything else, Hutton resolved to try and get though to British lines himself.

On 10 February 1900, he set out with a native guide, his aim to reach British forces at Chieveley. Huttons daring escape from Ladysmith was unsurprisingly widely covered in the press, as was the information he brought out about how the garrison was holding up. As for Huttons escape itself, his own description is by far the best: See pics of this. Hutton is mentioned a number of times in Fighting for the News ; The Adventures of the First War Correspondents.. Which again mentions his escape.

One Special, Arthur Hutton of Reuters, did successfully evade Boer Patrols and made his way across the Tugela to reach the British Lines. There he joined Churchill and Bennet Burleigh, who were among the Specials who followed Bullers attempts to force a way through the strongly held positions north of the. It is clear from Ungers narrative that within days of his escape, Hutton was back covering the war and it seems he followed the force that finally relieved Ladysmith on 28 February 1900. Cleary he carried on covering the War, for in the summer of 1900, he and another special were attacked by Boers, only to be saved by a patrol of Australian troops.

An incident occurred on Hamilton's expedition which was of interest, as it concerned some Australian troops, and one of Reuter's men/ whom they rescued from the: clutches of the enemy. The correspondent in question Hutton by name was making his way across from Kronstadt to Heilbron, and had got too far to the right! Cart was struck twice by bullets. Another correspondent,' who was travelling with' him, was taken prisoner, and had it not been for a New South Wales patrol coming down to his assistance and drawing the Boers off, Hutton would have shared the same fate; It. Was while galloping, up that Lieutenant Onslow, New South Wales a nephew of Judge Onslow, of Western Australia, was wounded. Regarding Hutton post Boer War, he was manager for Sir Joseph Robinson and Transfer Agent for the Robinson Group of South African Mines at some point. However he is noted as being resident in Australian.

During the Great War he served with the Red Cross Central Prisoner of War Committee. He has not been located on the medal roll for the Great War, though given his age and service, its likely he was only entitled to the BWM. South African rolls have been checked for the latter and these turned up nothing. In 1922, he married the daughter of Claus Spreckles of.

And resided at Nutfield Lodge. 7 October 1943 aged 89. He collection of papers held in the.