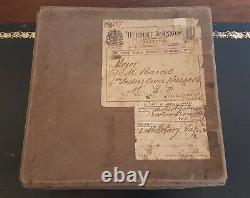 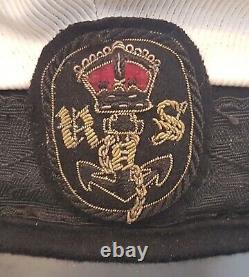 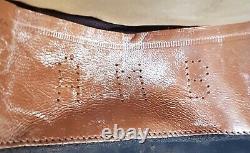 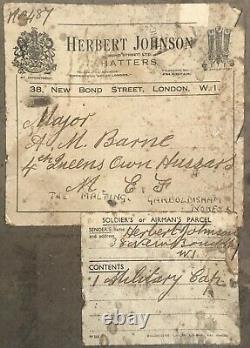 RARE Naval Cap with Provenance - Queens Hussars Churchills Colonel WW2. For sale is an extremely rare Royal Yacht Squadron cap which belonged to Lt. A M Barne OBE, Commanding Officer of the 4th Queens Own Hussars during the Second World War. Barne was born in 1906 and raised in Norfolk.

He attended Marlborough College and from there went to Sandhurst, from where he was commissioned into The Royals Dragoons in 1926. At the outbreak of war in 1939, Barne was stationed in Palestine, but shortly after assumed command in Italy.

He was later made Commanding Officer of the 4th Queen's Own Hussars and remained such throughout the Allied campaign in Italy. As the Commanding Officer of Churchills own former regiment, Barnes was invited to dine with the Prime Minister at Downing Street in the summer of 1945. His war diaries were recently published as Churchills Colonel - The War Diaries of Lieutenant Colonel Anthony Barne (2018). 5oz yachting cap, Royal Yacht Squadron, 1930-40s.

Lining of the cap punched with initials AMB. With the original box and address label. Royal Yacht Squadron caps are extremely rare to find, let alone accompanied by such important provenance.

Please contact me if you have any questions. The item "RARE Naval Cap with Provenance Queens Hussars Churchills Colonel WW2" is in sale since Monday, May 18, 2020.

This item is in the category "Collectables\Militaria\World War II (1939-1945)\Helmets/ Hats". The seller is "deigratia1552" and is located in Birmingham. This item can be shipped worldwide.