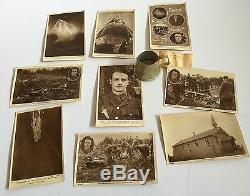 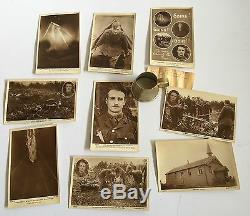 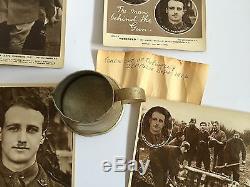 A small metal can/jug which was salvaged from the wreckage of the airship / Zeppelin shot down by Leefe Robinson. It comes with a note confirming that it was salvaged from the wreckage. The Schutte-Lanz SL11, a German Airship that crashed in Cuffley on the night of the 2nd of September 1916 It had already caused the deaths of 352 people in previous raids, including dropping 44 bombs on Hertford in one incident. The airship was brought down by Lieutenant William Leefe Robinson of the Worcester Regiment and Royal Flying Corpos and was the first airship to come down on British soil during World War One.

Thousands came to see the crash site and took away pieces of the wreckage and it is very rare therefore for a whole item to have been salvaged. The oil can, which I think is an oil can, although can't be certain, it might have held other sort of liquid, was salvaged and a note was put in the can as provenance.

This is a fantastic collectors item. If you have any further questions, please do not hesitate to contact me. The item "Rare Item Salvaged From Cuffley Airship Zeppelin shot down by Leefe Robinson" is in sale since Sunday, April 7, 2019. This item is in the category "Collectables\Militaria\World War I (1914-1918)\Other World War I Militaria". The seller is "mk45antiques" and is located in Bedford, Bedfordshire.