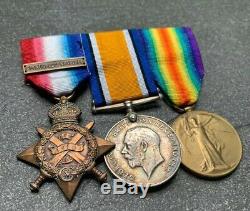 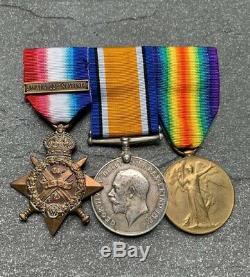 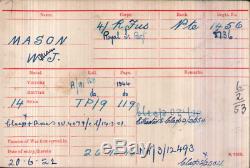 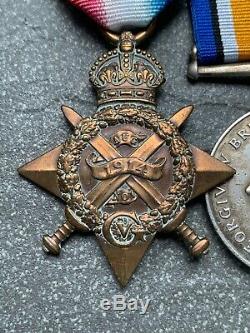 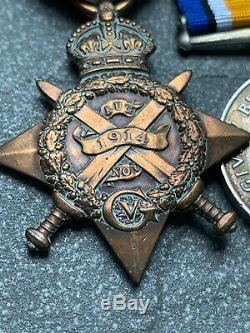 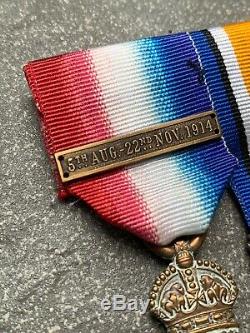 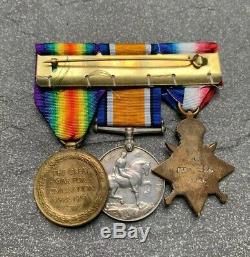 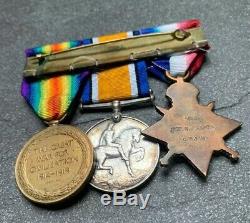 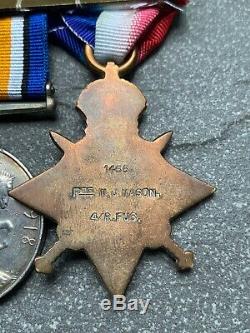 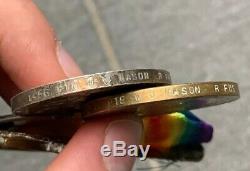 This is an excellent, super early-war medal set awarded to a soldier who was present in the first combat actions of World War One. The Mons Star (also known as the 1914 Star) was only awarded to soldiers who were in France or Belgium from August 5th to November 22nd 1914 - there were only a fraction of soldiers active in mainland Europe at this time, compared to 1915 and onwards. There were only 365,000 of these 1914 stars ever issued, compared to the 2.3 Million of the regular 1914-15 stars awarded! This particular 1914 Star medal set is named to Private William J. Mason of the 4th Battalion Royal Fusiliers, service number 1456. All three medals are inscribed to him around the medals' edges. Even rarer yet, this 1914 Star has its clasp present - which means that Private Mason was within range of enemy mobile artillery during the first weeks of the war!

Private Mason was entitled to the 1914 Star, Clasp, and Rose , as indicated in his Medal Index Card (see photo attached). He entered the war in Europe on October 26th, 1914. Interestingly, later in the war, he served with the Royal Irish Regiment under a new service number of 3736 - but all of his medals are inscribed with the Royal Fusiliers and his original service number. Don't miss out on this beautiful, rare early-war set! If you would like any further information, please do not hesitate to contact me!!

Follow us for lots more Canadian, British and other militaria from WW1 and WW2!! Many listings coming up in the near future. The item "Original named WW1 British 1914 MONS STAR & Clasp Medal Trio complete rare set" is in sale since Sunday, April 5, 2020. This item is in the category "Collectibles\Militaria\WW I (1914-18)\Original Period Items\Great Britain\Medals, Pins & Ribbons".

The seller is "vancouvermilitaria" and is located in Vancouver BC. This item can be shipped to Canada, United States, Australia, United Kingdom.