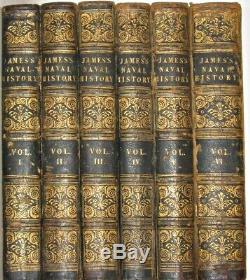 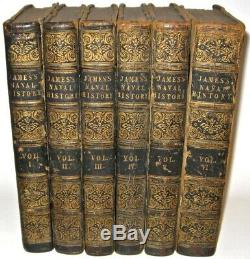 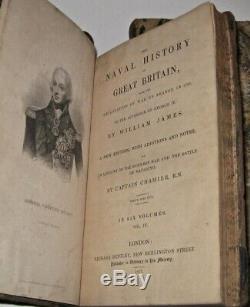 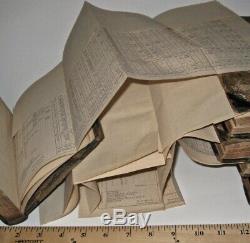 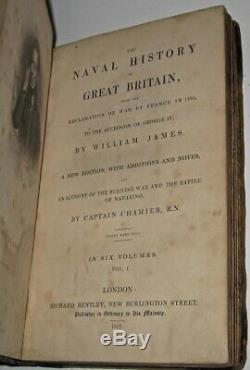 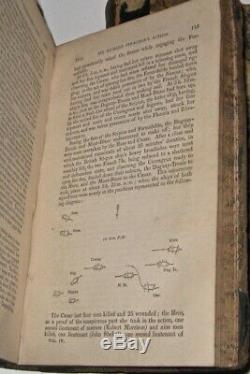 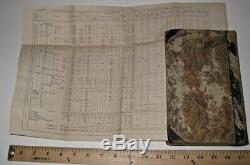 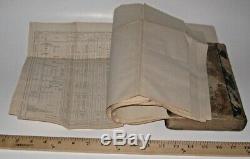 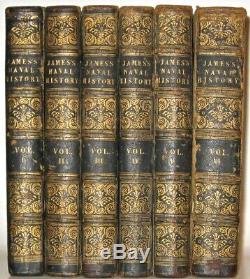 The NAVAL HISTORY OF GREAT BRITAIN! From the Declaration of War by France in 1793, to the Accession of George IV.

Complete with the extensive fold out maps. With 24 portraits, 38 battle-plans in the text, and 28 huge folding tables! This is an exceedingly important and highly desirable set. This is the best edition of this set, complete with the new content. A New Edition , with Considerable Additions and Notes, appearing for the first time.

This is an important and valuable set despite the heavy wear. A "monument of accuracy - it has stood the test of time and remains the best account of the naval side of the Revolutionary and Napoleonic Wars" Kemp, The Oxford Companion to Ships and the Sea, p. First conceived of when he was held prisoner in America during the War of 1812 the Naval History is a remarkable work. Working under the motto "Verite sans Peur", James set himself standards of inclusiveness and accuracy extraordinary for the 19th century. His aim was to compile... An exact account of every operation of naval war during the period named. He consulted not only published works, especially the official narratives, both British and French, but also the logs of the ships, and, whenever possible, the participants themselves" ". Successively mined by Forester and OBrian for incident and colour, this well-written history is not only essential reference for the period, but makes excellent reading. A New Edition, with Considerable Additions and Notes, and an Account of the Burmese War and the Battle of Navarino. With New Content appearing for the FIRST TIME! This is an important set. Complete with the rare fold outs. London, Richard Bentley, Printed in 1837!

This set is well OVER 150 YEARS OLD!! Bound in quality leather bindings! Raised hubs in the spines! Fully illustrated with engraved plates and NUMEROUS FOLD-OUTS!!

With 24 portraits, 38 battle-plans in the text, and 28 huge folding tables!! CONDITION: ALL FOLD OUTS ARE PRESENT.

All volumes retain the original fold outs. This set has extensive generalized wear, some of which is clearly shown in the pictures.

It is still bound in the original bindings. This set is complete and intact but it is in only good to poor condition, with wear typical of that book grade, but intact. These are the original bindings from 1838. This set is approaching 200 years old. This set has extensive generalized usage wear to these original bindings. This means that this set has EXTENSIVE and heavy ABRASION and EXTENSIVE USAGE WEAR consistent with that book grade! Some of the original marbled paper over the boards is chipped. There is a lot of general rubbing and signs of usage, but the set is intact and complete, with the rare maps. Hinges are strongly attached, although there is hinge starting, and evidence upon close inspection of some professional archival restoration.

Some overextended pages and gatherings but still tightly bound. Bound in quality morocco leather bindings. The marbled paper on the covers is chipped, exposing the boards, as is clearly shown in the pictures. Printed on quality paper that will last. Some foxing and some staining to the frontisplates.

No writing, or previous signs of ownership but an early bookseller stamp. This rare and highly desirable set is complete, including the fold outs. This is a gorgeous antiquarian set.

He consulted not only published works, especially the official narratives, both British and French, but also the logs of the ships, and, whenever possible, the participants themselves (DNB). Although William Jamess work was criticized "on the grounds of prejudice" NMM Catalogue of the Library, Vol. # 2158 it stands as one of the major naval studies of the period and a useful source of reference on sea-fights, battles and biographies of officers during the 1793 to 1815 wars. The idea to write such a history came to James in 1813 while he was being held prisoner in the United States during the War of 1812. The work is embellished with diagrams and folding tables. JAMESS HISTORY OF THE ROYAL NAVY 1793 TO 1827. This is a gorgeous set, and displays beautifully! From Wikipedia, the free encyclopedia. For other people named William James, see William James (disambiguation). Not to be confused with William Milbourne James. Who also wrote on the British Navy. James (1780 28 May 1827) was a British lawyer turned military historian who wrote important histories of the military engagements of the British with the French and Americans from 1793 through the 1820s. Although little is known of his early life, William James was trained in the law and began his career as an attorney.

He practised before the Supreme Court of Jamaica. And served as a proctor.

In the Vice-Admiralty Court of Jamaica from 1801 to 1813. In 1812, when war broke out between Great Britain and the United States, James was in the United States. Detained by American authorities as a British national, he escaped to Halifax, Nova Scotia. This experience interested him in the War of 1812. And he began to write about it, particularly defending the reputation of the Royal Navy.

And pointing out the factual errors and excessive claims that American reports made against the Royal Navy. His initial literary efforts seem to have been letters written to the editor of the Naval Chronicle under the pen name'Boxer'. In 1816, he published his first pamphlet, An inquiry into the merits of the principal naval actions between Great Britain and the United States. This pamphlet caused a controversy in the United States, leading to much American criticism of James's views.

James went on to write his six-volume Naval History of Great Britain, 1793 1827 in reaction to American accounts of the War of 1812. Similar in approach, this work was highly critical of the history that his contemporary Captain Edward Pelham Brenton. Had written on the subject and led to controversy between them that is reflected in successive editions of their works.

James's legal background would influence his approach to obtaining evidence. He attempted, therefore, and managed to board American warships and speak to their crews, to verify their characteristics at first hand.

In this pursuit he claimed, for example, that the USS Constitution. Was not only much larger, but also more heavily manned and armed, than HMS Guerriere.

Contrary to previous American claims that the ships had been equal at the time of their engagement. More alleged erroneous American assertions were dealt with.

Published an index to the history in 1895, which is now available on the Internet. As a young Harvard University. Undergraduate in 187677, began work on a response from the American perspective. Published in 1882 as The Naval War of 1812 , the book took James to task for what Roosevelt felt were glaring mistakes and outright misrepresentations of fact based on malicious anti-American bias and shabby research, despite James's painstaking research and primary sources. In places, Roosevelt becomes almost mocking in his criticism of James.

The book was an immediate sensation in the United States and is still considered a source book on the subject (no less than three books on the War of 1812 written in 2006 alone quoted from Roosevelt's response); however, Roosevelt's conclusions have been disputed by Professor Andrew Lambert in his 2012 book The Challenge: Britain Against America in the Naval War of 1812. Scholars further note that Roosevelt's effort did not actually refer to James's two books on the War of 1812. Instead, Roosevelt referred to James's Naval History series, which holds only a shortened version.

This avoidance of James's arguments and detailed evidence of 1817 and 1818 is seen by some as largely undermining Roosevelt's critique of James's work. Moreover, Roosevelt is also accused of ignoring the earlier American claims that provoked James in the first place, claims that might be best understood to be beneficial to American morale at the time.

However one might also read Ian Toll. S Six Frigates , published in 2006, where Toll cites Roosevelt's purpose as not only showing James' distortions and fabrications but also showing James' American contemporaries as being equally guilty of being culpable.

In his book Roosevelt stated. And it must always be remembered that a victory, honourably won, if even over a weaker foe, does reflect credit on the nation by whom it is gained. It was creditable to us as a nation that our ships were better made and better armed then the British frigates.... Some of my countrymen will consider this but scant approbation, to which the answer must be that a history is not a panegyric.

A Full and Correct Account of the Military Occurrences of the late war between Great Britain and the United States of America; with an appendix and plates. London: Printed for the Author, 1818.

Warden refuted; being a defence of the British navy against the misrepresentations of a work... Account of the United States of North America, by D. In a letter to the author of that work (London, 1819). The naval history of Great Britain from the declaration of war by France in February 1793 to the accession of George IV in January 1820 : with an account of the origin and progressive increase of the British Navy...

Volume 6 , Richard Bentley, London, pp. The item "JAMES'S NAVAL HISTORY OF GREAT BRITAIN! GIFT" is in sale since Thursday, September 5, 2019. This item is in the category "Books\Antiquarian & Collectible".

The seller is "merchants-rare-books" and is located in Moab, Utah. This item can be shipped worldwide.