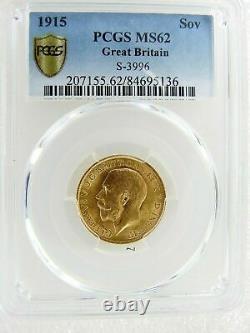 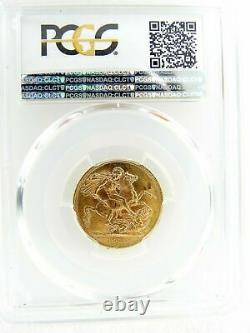 Mint STATE PCGS GOLD SHIELD LABEL 1915 gold full Sovereign coin. This coin weighs the same as a regular sovereign, at 7.98gram. Date 1915 Denomination Sov Variety S-3996 Region Great Britain Grade MS62 Holder Type PCGS Gold Shield Great Britain under. George V - King: 6 May 1910 - 20 January 1936 Saint George, born in Lydda, Roman Palestine, was a soldier in the Roman army and was later venerated as a Christian martyr. His father was Gerontius, a Greek Christian from Cappadocia, and an official in the Roman army. His mother, Polychronia was a Christian from Roman Palestine.

Saint George became an officer in the Roman army in the Guard of Diocletian. In hagiography, Saint George is one of the most venerated saints in the Catholic (Western and Eastern Rites), Anglican, Eastern Orthodox, and the Oriental Orthodox churches. He is immortalized in the tale of Saint George and the Dragon and is one of the Fourteen Holy Helpers. His memorial is celebrated on 23 April (6 May), and he is regarded as one of the most prominent military saints.

Many Patronages of Saint George exist around the world, including: Georgia, England, Egypt, Bulgaria, Aragon, Catalonia, Romania, Ethiopia, Greece, India, Iraq, Lebanon, Lithuania, Palestine, Portugal, Sardinia, Serbia, Macedonia, Ukraine, Russia and Syria, as well as the cities of Genoa, Amersfoort, Beirut, Botoani, Drobeta Turnu-Severin, Timioara, Fakiha, Bteghrine, Cáceres, Ferrara, Freiburg im Breisgau, Kragujevac, Kumanovo, Ljubljana, Pérouges, Pomorie, Preston, Qormi, Rio de Janeiro, Lydda, Lviv, Barcelona, Moscow and Victoria, as well as of the Scout Movement and a wide range of professions, organizations, and disease sufferers including leprosy, plague, herpes and syphilis. The episode Saint George and the Dragon appended to the hagiography of Saint George was Eastern in origin, brought back with the Crusaders and retold with the courtly appurtenances belonging to the genre of Romance. The earliest known depictions of the motif are from tenth- or eleventh-century Cappadocia and eleventh-century Georgia; previously, in the iconography of Eastern Orthodoxy, George had been depicted as a soldier since at least the seventh century. The earliest known surviving narrative of the dragon episode is an eleventh-century Georgian text. The dragon motif was first combined with the already standardised Passio Georgii in Vincent of Beauvais' encyclopedic Speculum Historiale, and then Jacobus de Voragine's Golden Legend (ca 1260) guaranteed its popularity in the later Middle Ages as a literary and pictorial subject. The legend gradually became part of the Christian traditions relating to Saint George and was used in many festivals thereafter.

George V (George Frederick Ernest Albert; 3 June 1865 20 January 1936) was King of the United Kingdom and the British Dominions , and Emperor of India , from 6 May 1910 until his death in 1936. He was the second son of Albert Edward, Prince of Wales (later King Edward VII), and the grandson of the reigning British monarch, Queen Victoria. From the time of his birth, he was third in the line of succession behind his father and his elder brother, Prince Albert Victor, Duke of Clarence and Avondale. From 1877 to 1891, George served in the Royal Navy , until the unexpected death of his elder brother in early 1892 put him directly in line for the throne. On the death of his grandmother in 1901, George's father became King-Emperor of the British Empire , and George was created Prince of Wales.

He succeeded his father in 1910. He was the only Emperor of India to be present at his own Delhi Durbar.

His reign saw the rise of socialism , communism , fascism , Irish republicanism , and the Indian independence movement , all of which radically changed the political landscape. The Parliament Act 1911 established the supremacy of the elected British House of Commons over the unelected House of Lords. As a result of the First World War (191418) the empires of his first cousins Tsar Nicholas II of Russia and Kaiser Wilhelm II of Germany fell while the British Empire expanded to its greatest effective extent.

In 1917, George became the first monarch of the House of Windsor , which he renamed from the House of Saxe-Coburg and Gotha as a result of anti-German public sentiment. In 1924 he appointed the first Labour ministry and in 1931 the Statute of Westminster recognised the dominions of the Empire as separate, independent states within the Commonwealth of Nations. He was plagued by illness throughout much of his later reign and at his death was succeeded by his eldest son, Edward VIII. Great Britain, also known as Britain, is an island in the North Atlantic off the north-west coast of continental Europe. With an area of 209,331 km2 (80,823 sq mi), it is the largest island in Europe and the ninth-largest in the world.

In 2011 the island had a population of about 61 million people, making it the third-most populous island in the world, after Java in Indonesia and Honshu in Japan. The island is the largest in the British Isles archipelago , which also includes the island of Ireland to its west and over 1,000 smaller surrounding islands. The island is dominated by an oceanic climate with quite narrow temperature differences between seasons. Politically, the island is part of the United Kingdom of Great Britain and Northern Ireland , constituting most of its territory: most of England , Scotland , and Wales are on the island, with their respective capital cities, London , Edinburgh , and Cardiff. The term Great Britain often extends to include surrounding islands that form part of England, Scotland, and Wales.

A single Kingdom of Great Britain resulted from the Union of Scotland and England (which already comprised the present-day countries of England and Wales) in 1707. More than a hundred years before, in 1603, King James VI , King of Scots , had inherited the throne of England, but it was not until 1707 that the Parliaments of the two countries agreed to form a unified state. In 1801, Great Britain united with the neighboring Kingdom of Ireland , forming the United Kingdom of Great Britain and Ireland , which was renamed the United Kingdom of Great Britain and Northern Ireland after the Irish Free State seceded in 1922. The item "GEM 1915 Great Britain Gold RARE FULL Sovereign Coin PCGS MS62 Variety S 3996" is in sale since Saturday, November 7, 2020. This item is in the category "Coins & Paper Money\Coins\ World\Europe\UK (Great Britain)\Gold". The seller is "myremoteworld" and is located in Woodland Hills, California. This item can be shipped worldwide.