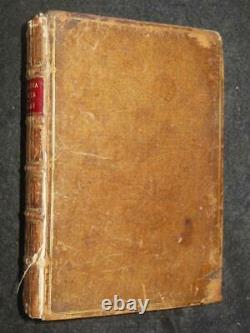 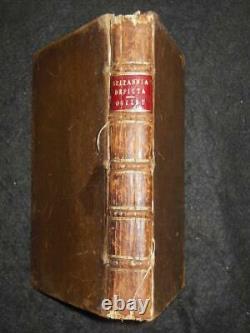 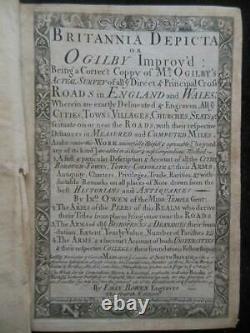 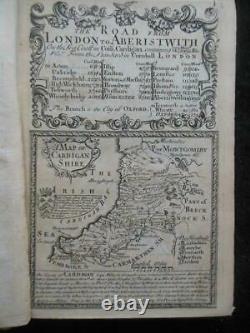 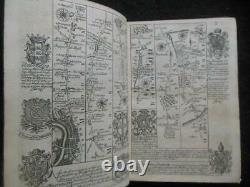 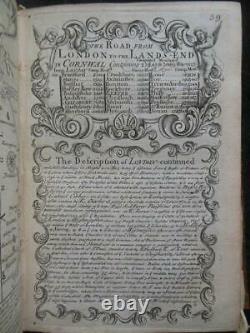 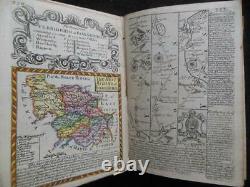 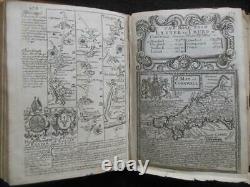 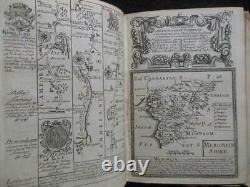 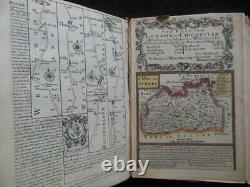 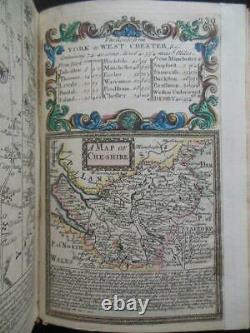 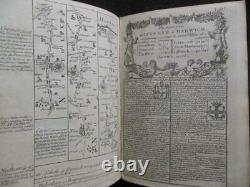 8 pages of tables and 273 engraved maps, as called for, 3 or 4 hand coloured, though mostly plain and in good order, though 3 leaves are detached. Full leather binding, well worn, with the rear cover detached, front cover shaky with the outer hinge cracked. Banded spine, chipped to the ends, morocco title plate present to the upper spine. Maps are generally in good condition, with a little soiling to a couple possibly old glue?

, with a couple having some edgewear, one with a repair to the lower edge, one page close cropped to the lower edge. Would benefit from a rebind, as complete examples of this book are rarely seen. Britannia Depicta or Ogilby Improv'd (1736) 273 Maps Emanuel Bowen, Travel, RARE. Fourth edition, first published in 1720 in its current format, but a reduced version of Ogilby's "Britannia" first published in London in 1675.

Title of His Majesty's Cosmographer early in 1671 [and] drew upon the support of the King and other patrons in the production and publication of Britannia. The work for which he became best known. Chiefly a road atlas, it was securely based on contemporary and collaborative research.

Ogilby drew out 2519 miles of road in the form of 100 strip maps, a technique that was widely imitated throughout the following century. Measuring distances by waywiser (his "great wheel"), he made allowance for roads that ascended hills yet had to be depicted in two dimensions on paper, and his surveys helped to standardize the mile at 1760 yards throughout the kingdom. Britannia marked the first major advance in cartography in England since the Tudor period, though it did echo earlier traditions. It was republished in 1698, 1719, and 1720, and on subsequent occasions up to modern times (DNB).

This is one of Emanuel Bowen's earlier works, and his contribution to eighteenth-century world and British atlases would be substantial. Using contemporary sources, he published and drew maps for the "Complete System of Geography" 2 vols. 1744-7, "The Maps and Charts to the Modern Part of the Universal History" (published in 1766 under Thomas Kitchin's name), the celebrated maps for John Harris's "Navigantium atque itinerantium bibliotheca" (1744-8), and all twenty-two new plates in the final edition (1754) of Patrick Gordon's "Geography Anatomized", the county maps in his "Large English Atlas" (1760) the first to cover England and Wales on a large scale, and subsequently reduced by Bowen and Kitchin for their "Royal English Atlas" ca.

1763 and then by Emanuel and Thomas Bowen for "Atlas Anglicanus" (1767-8), published after Emanuel Bowen's death by Kitchin. "All three works are characterized by detailed texts in the spaces surrounding the maps and by elegant rococo decoration, which became the hallmark of his engraving" (Iolo Roberts and Menai Roberts for DNB).

Please also await an invoice if purchasing a'Courier' item. Please base your DSR for Dispatch time on this, and not the transit time, which is out of my control. Items are described as accurately as possible, but if you think I have overlooked anything please drop me a line. This excludes foxing, previous owner's names or inscriptions, etc. Any negative points, such as missing or torn pages are usually noted on the relative listing.

I would rather my customers be pleasantly surprised than bitterly disappointed. Please note that heavier items are not able to be sent to PO Boxes by UK Couriers. New: A new book, never used. Fine (F): Should have no flaws, a perfect copy of a used book. Mint: Another term for Fine. Near Fine (NF): May show a small flaw, such as shelf wear, but nearly perfect and unread. Very Good (VG): The broadest category for used books, this describes any average used book. May have small flaws, and has probably been read, but should appear overall clean and attractive. Good (G): Will probably have significant wear or damage, although is still intact. Suitable for reading, but not necessarily a good gift copy. The old saying in bookselling is good ain't good. Fair: Another term for Poor or Reading Copy : Heavily worn or damaged, a poor book will be readable but not attractive. Binding Copy: This will be the complete pages of the book, but the binding has been broken or damaged to the point it will need professional rebinding. Get images that make Supersized seem small. Showcase your items with Auctiva's. The item "Britannia Depicta or Ogilby Improv'd (1736) 273 Maps Emanuel Bowen, Travel, RARE" is in sale since Monday, November 30, 2020. This item is in the category "Books, Comics & Magazines\Antiquarian & Collectable".

The seller is "blofieldbooks" and is located in Norwich. This item can be shipped worldwide.