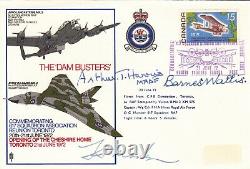 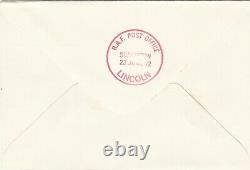 This cover was flown from Canadian Forces Base Downsview in Toronto to RAF Scampton, home of 617 Squadron near Lincoln, by Vulcan V bomber and commemorates the 617 Squadron Association Reunion in Toronto Canada and the opening of the Leonard Cheshire Home for disabled adults in Toronto. The front cover features the WW2 Avro Lancaster bomber and the Avro Vulcan bomber and displays a 15c Canadian stamp and cancel dated June 21, 1972 with the rear featuring the RAF Scampton post office cancel. Condition is Very Good to Excellent.

It is rare to find all three of these famous signatures on a single cover with a cachet so closely associated with the 617 Dam Busters Squadron. All eras of German stamps up to the end of WW2. UK, Channel Islands, and Commonwealth stamps and FDCs.

Please check my other listings for more quality collectibles of postal history, coins, postcards, documents, books, maps and prints, sports memorabilia, and other antiques and ephemera. For sales of higher value stamps and covers, I will scan both sides and provide some approximate grading characteristics.

As a minimum I will follow the Scott Catalogue grading system. Please contact me if you are not satisfied for any reason so that we may mutually resolve the issue. I will not knowingly sell fakes or forgeries and if you have any concerns that an item is not genuine as described, please contact me.

The item "Barnes Wallis / Bomber Harris / Harold Martin / Signed RAF Dam Busters RARE" is in sale since Sunday, February 14, 2021. This item is in the category "Collectables\Autographs\Certified Original Autographs\Military". The seller is "chunkyangus" and is located in Doncaster, Epworth. This item can be shipped worldwide.