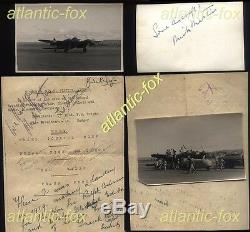 DUE TO DOWNSIZING OUR LARGE RAF PRIVATELY OWNED MUSEUM COLLECTION WE HAVE ON OFFER SELECTED ITEMS FROM THE COLLECTION Very Rare Mick Martin & Ted Sismore signed Photo and Menu from RAF STATION KISUMU, Kenya while refuelling the Mosquito on their Record Breaking Speed attempt Heathrow to Capetown in 1947. The lot comprises of Two Photo's of the Mosquito at Kenya, one signed "Some Aircraft / Mick Martin", the other showing the aircraft being refueled, and the DINNER MENU signed by Both Martin and Ted Sismore his Navigator, and others. SEE SCAN 30 April1 May 1947: Squadron Leader H. Mick Martin, DSO, DFC, pilot, and Squadron Leader Edward Barnes Ted Sismore, DSO, DFC, navigator, departed from Heathrow Airport, London, England at 20:06 D.

Martin and Sismore cut 23 hours, 36 minutes off of the record speed for the route set by Flying Officer A. Betty Kirby-Green with a DH.

88 Comet, G-ACSS, 1416 October 1937. For their record-breaking long-distance flight, Martin and Sismore were awarded the Britannia Trophy of the Royal Aero club of Great Britain.

Their airplane was a de Havilland DH. 34, very long range, high altitude reconnaissance aircraft. It was the fastest of all Mosquito variants. 98 Mosquito was a twin-engine aircraft constructed primarily of wood.

The Merlins drove three-bladed de Havilland Hydromatic constant-speed, quick-feathering, propellers with a diameter of 12 feet, 0 inches (3.658 meters) through a 0.420:1 gear reduction. The Merlin 113 weighed 1,650 pounds (748.4 kilograms) while the 114 was slightly heavier, at 1,654 pounds (750.2 kilograms). The 114 drove a second supercharger for cabin pressurization. 24 had bulged bomb bay doors to accommodate an 869 gallon auxiliary fuel tank and could carry a 200-gallon (909 liter) slipper tank under each wing. The total fuel capacity of the LondonCapetown Mosquito was was 1,267 Imperial gallons (5,760 liters).

Air Marshal Martin retired from the RAF in 1974. He died 3 November 1988 at the age of 70 years. (Acting) Squadron Leader Ted Sismore later, Air Commodore Edward Barnes Sismore, DSO, DFC and Two Bars, AFC, AE, OD (K), MBIM, was the best long-range low-level navigator in the Royal Air Force. He was the lead navigator for the attack of Amiens Prison, 18 February 1944, and the raid on the Gestapo headquarters at Copenhagen, Denmark in 1945.

The seller is "atlantic-fox" and is located in Maryport. This item can be shipped worldwide.