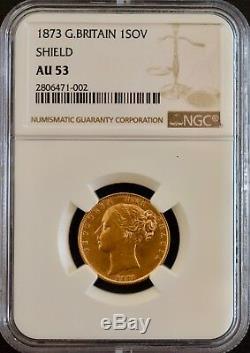 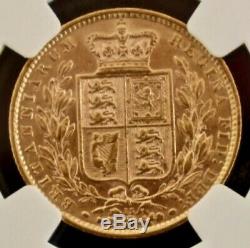 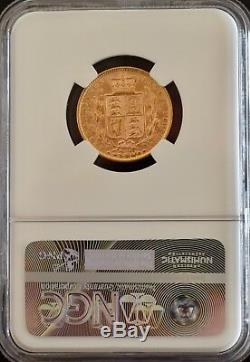 1873 Gold Shield Sovereign London Mint NGC AU53 Sov Great Britain. Graded AU53 (Almost Uncirculated 53) by NGC. This coin is die number 15. Marsh claimed only 76 number existed. I feel that the die numbers recorded for 1873 in Marsh may be unreliable & could be some sort of human or typographical error, perhaps transposing 1872 known die numbers for 1873 which is more likely.

The fact there are some rather large gaps in the die numbering of the Bentley specimens leaves the verdict open. What I can say is in over thirty years of seriously looking, most of the numbers claimed to exist have just not been on the marketplace. Mark Cooper Trading as M. Has been a front-runner in the coin & bullion industry for over 30 years. Helped build some of the greatest collections of our time.

In some cases, we even helped to sell them. Our customer service, fair pricing, and trustworthy service have made us a top rated company. Most of our coins are graded to the World Standard known as the'Sheldon Standard' Below is a chart showing how it compares to some UK coin grading standards, MS stands for Mint State (Uncirculated).