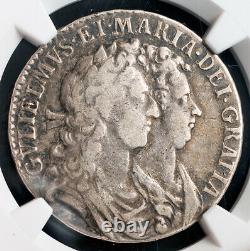 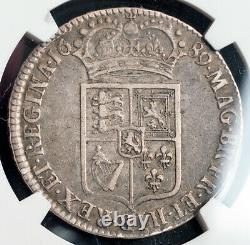 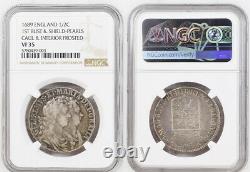 Reverse: Crowned and quartered coat-of-arms. Date (16-89) split in legend above.

William III & II (4 November 1650 8 March 1702) Dutch. Was a sovereign Prince of Orange by birth. From 1672 he governed as Stadtholder William III of Orange Dutch. Over Holland, Zeeland, Utrecht, Guelders, and Overijssel of the Dutch Republic.

From 1689 he reigned as William III over England and Ireland, and as William II over Scotland. He is informally known in Northern Ireland and Scotland as " King Billy ". A member of the House of Orange-Nassau, William won the English, Scottish, and Irish crowns following the Glorious Revolution, in which his uncle and father-in-law, James II, was deposed. In the British Isles, William ruled jointly with his wife, Mary II, until her death on 28 December 1694. The period of their joint reign is often referred to as "William and Mary".

A Protestant, William participated in several wars against the powerful Catholic king of France, Louis XIV, in coalition with Protestant and Catholic powers in Europe. Many Protestants heralded him as a champion of their faith.

Largely because of that reputation, William was able to take the British crowns when many were fearful of a revival of Catholicism under James. William's victory over James II at the Battle of the Boyne in 1690 is commemorated by the Orange Institution in Northern Ireland to this day. His reign marked the beginning of the transition from the personal rule of the Stuarts to the more-Parliament-centred rule of the House of Hanover.

The item "1689, Great Britain, William III & Mary. Rare Silver ½ Crown Coin. NGC VF-35" is in sale since Monday, June 21, 2021. This item is in the category "Coins & Paper Money\Coins\ World\Europe\UK (Great Britain)\Half Crown". The seller is "coinworldtv" and is located in Wien. This item can be shipped worldwide.